My tryst with Bharatnatyam

When I was about 12 years old, my mother decided to enroll me into a Bharatnatyam class. I hated it. She had various reasons for enrolling me into that class and I had those very reasons to not want to go for these classes that happened twice a week. The first reason being that she as a child was too poor to afford a dancing class. Years later she told me the story of how longingly one day she watched a dance class being taught in a hall. She was too poor to afford food even, and hence dancing was out of question. So she fulfilled her desire through me. I don’t know how mothers can do this. Anyways, the second reason was that knees down a strange kind of paralysis would happen to me, especially during winters. I would be unable to move my legs for hours and would get sudden cramps that would last for hours. Doctors had no cure. So this was one way she thought this pain would go. How grateful I am to her today for following her intuition!

On the first day of my class, I was struck by the grace and splendor of my dance teacher, a renowned Bharatnatyam exponent, Sucheta Chapekar. I had been besotted by images of goddess Saraswati, but when I saw my teacher, I knew I had met a Goddess in person! Her first lines that day in that first class were, “Man became very happy one day. And he started dancing. Dance is an expression of joy”. I still remember these words and till date whenever I am joyous, I naturally start dancing.

The next five years of Bharatnatyam study was a dive into the language of the body – a sacredness of how it expresses joy, how we become the medium and the body a commander…nothing was passive anymore! There was an inner state of alertness and stillness co-existing with each other. My mind would follow the rhythm and the feelings would sculpt images from a face that I had never imagined could do so many things. My hands were constantly changing seasons with every adavu (sequence of postures) and mudra. I learned to draw a deer, a bee and a peacock with my hands.  Moreover, my arms changed shape – they became curvaceous thanks to the constant alignment we had to keep our hands in – like an eagle’s curved wing-line. Further changes happened when in those hours of practice my mouth was totally silent, but the rest of the body was in constant communication and communion. It was a simultaneity of silence and speech that was exhilarating to say the least! Healing the legs happened as a by-product. A greater transformation was happening that I was learning the art of expression, the art of story-telling through body movements and I was a child with a new vocabulary! It brought about so much transformation for me! Most of my teenage rebelliousness was channeled into dance. My focus which was lacking earlier as a result of daydreaming became greatly sharpened. While earlier I felt largely disconnected with my body, now I felt one with it. I used to exclaim that I could finally feel my feet touching the ground. And this was emotionally felt as well. While earlier I was a quiet child who would sit mute in classrooms, I had become lively. I had never learned to express as a child and that development was greatly lacking in me. But after this five year course, I was completely changed. I found joy in expressing through the eyes, through body movements, etc. It seemed like there was magic happening every minute of the dance! And every year getting onto the stage with the new traditional dress, the red bindis on the forehead, the red alta on the feet and performing the complicated choreography in front of all parents felt so grand!

These lessons still serve me in my daily life. One of my favorite shlokas that was a norm in Bharatnatyam was,

“Where the hand goes, there must go vision;

Where the vision goes, there must go heart;

Where the heart goes, there must go Joy”

This is truly zen as I see it now! 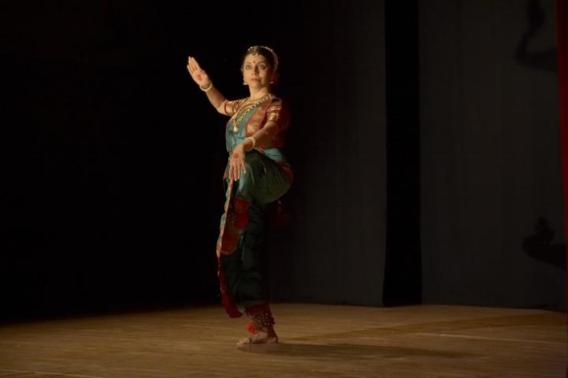 If you have a child who has an artistic bent of mind – you can make them out when they daydream a lot 🙂 – try introducing dance to them. It might change their life like it did mine!

Dedicated in deep appreciation to my dance teacher / guru – Sucheta Chapekar who is the founder of the institute “Kalavardhini” all across Maharashtra, India, and to whom I greatly owe my love for expression! 🙂