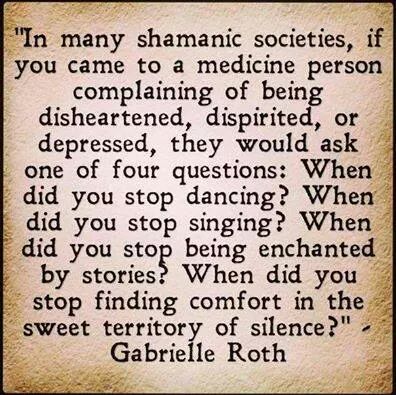 Stories are medicine. They heal us because we draw emotional connections to them. Over the last few years I have been not only studying the healing arts, but also storytelling, screenplay writing and its various aspects.

I love Carl Jung’s work. In fact he laid down the term “Inner Child” observing his own behaviors stemming from conclusions he had drawn as a child. Then he also coined the terms “Anima and Animus” which in my understanding of dealing with various issues of the feminine and masculine, I can say are revolutionary. But to treat this as psychology i.e science based on human behaviors and drawing structures out of people’s behaviors is like applying a formula to film-making and using that formula to imagine. It is regressive and it doesn’t work. Yes you do need to understand structures for the awareness of these heals and helps you break your patterns. However, far too often, we get caught up in the science and forget the one thing that led us there – the mystery, the unknown. This itself takes us to the art.

Past life regression, inner child work and even rebirthing-breathwork heal you because they are eventually art forms. They point to the unknown. They bring out aspects of you that you wouldn’t otherwise would’ve guessed at. However, if you don’t correctly see what the unknown is trying to point you to, you reduce it to a story without understanding its implications and accessing its multidimensional nature. It is this very nature that heals us.

Recently I came across someone who had undergone multiple past life regressions from several people. They had served a purpose, and yet she found it difficult to change herself. At the end of a very long history-taking that unfolded, I told her she doesn’t need regression sessions. She was confused. Then I told her how through every session she had come to strengthen her core belief that no therapist had perhaps seen or acknowledged – her mind had been using these sessions to confirm her theory how one family member was against her and was out to harm her wellbeing. I told her what had changed the course of my inner awareness at a time when I thought my own mother was against my own wellbeing, and I had tried various ways to “cut cords” was the advice – “Your mother is your guru. Find that guru in her and you will be spiritually liberated“.

It took me 7 years to go from acceptance to surrendering to living this truth. The journey was worthwhile every bit for it taught me an important lesson – that wellbeing doesn’t come at the cost of deleting people in your life but comes from a healthy balance of inter-dependence. The rest of the session unfolded without glamour. She reported a shift in herself afterwards.

This is where the story was the same, but the perspective different. An ex-Buddhist monk often quotes, “the mind has the tendency to prove itself right“. True healing through stories happens when the very beliefs you are “certain” about are debunked in face of reality; reality which is observed as a 360 degree perspective that is larger than our own finite viewpoint. This is the true “stepping out” of a person as a hero in the oft-cited “hero’s journey“.
A sign that you are truly being led by a larger perspective rather than your own narrow-sense, is that you suddenly feel responsible in giving to others what you thought you lacked. In this woman’s case it was compassion, which is what she desired from her family member. In my case, it was unconditional acceptance which I desired from my mother.

There are several “common truths” or common themes one discovers through these journeys irrespective of the healing modality one uses. Here are some of the most striking ones which I personally keep discovering again and again in various aspects, like a kaleidoscope continuously moving –

When a woman who had been routinely physically beaten up as a child by her parents underwent inner child healing, at one point she looked into the eyes of her parent deeply in a regressed state. At that moment she looked into the thoughts and emotions and only saw pain there. The pain of not being good enough. It had nothing to do with her. At that moment forgiveness occurred without using the “f” word. When you truly start understanding this, you allow people’s behaviors to “pass through you” or you quietly “reinterpret” without making it about the other person. Ultimately, as the Toltec wisdom says, nothing anyone does or says is because of us. And the other way round.

Behind every act of ours there is an intention operating. However harmful the act may appear to be, beneath the act is innocence. It is rather a continuation of the above understanding in fact, that it isn’t personal.
In a role reversal, another person regressed and saw that he had almost killed someone. His core issue was guilt. When he looked into his own intention, initially it was the pleasure he got from exerting his power. When he looked deeper, it hit him that he felt powerless which drove him to believe that. When he looked even deeper, he saw that he needed the power to protect the territory he was designed to protect. At the end of the day this was a man doing his job. And one might argue, rather too well. The core intention was harmless and innocent.
We cannot hold ourselves guilty for what we do not know about ourselves.

3. I am the only one punishing myself

She came for a regression because the one she loved had married someone else even though he too loved her and now they both regretted it. When she regressed she saw that she was angry that he had left her in one life and never returned even though he said he would. So she created this as a means to punish herself and her lover, a contract that “I will make sure we will keep each other apart”. When she went into the light of higher consciousness before she chose that lifetime, her spiritual guide warned her and asked her not to choose this kind of lifetime. She did it anyway. There she understood that no one else is doing the forgiveness because no one else is doing the punishing. We are the only creators and choice makers. This whole belief of a god punishing or forgiving us is a trap to escape our divine power – the power to choose kindness and let go.

4. Lack of awareness is the only mistake (sin)

A profound shift occurs when you view yourself on the scale of Eternity rather than on the scale of time. You begin to see that the only way to understand your mistakes is awareness. The game of earthly existence is forgetfulness. We forget we have lived here before. We forget we have multiple chances to learn, play and grow. We forget we are beyond our limited roles that we are playing. We forget we signed up for those roles. So we forget why we did it. And we start taking this game seriously and get more entangled. The only medicine is awareness. The only healing is awareness. Awareness of our infinite nature, not just a mental understanding, but making day to day, moment to moment choices based on this. Awareness that helps us step out of the seriousness of the game, instead of wanting to abandon the game through death or suicide and instead play it, rather than suffer it.
Stubbornly sticking to the awareness that “I am Love, I am Light” is our only redemption.

5. Nothing goes away until it teaches you what you needed to learn

Patterns repeat because life lessons are not Aesop’s fables with a moral of the story cut out for you to know. Often people opting in for regression are what we call mature souls. Just as a person has an age, the soul too has an age depending on the kind and number of lives it has led. This reflects in the instant maturity a person seems to be born with. The more mature, the more subtle are life lessons. They are more experience-based understanding of the qualities such as compassion, forgiveness, humility, oneness, generosity of spirit. One experience is usually not enough to imbibe these qualities. And here is a lesser known secret – these qualities are not to be ‘understood’, they are to be integrated as your very existence, your very physical presence. It’s as if you become more and more impersonal, experience after experience until you become a living embodiment of these alone.

5. Freedom is the absence of belief

A good example was a woman who was jealous that a certain family member was better off than her and was constantly comparing herself. In a space of expanded awareness she saw how this so-assumed ‘deprivation’ had given her an inner strength that helped her become a bigger person. In this understanding this belief of higher and lower fell. There was no need to compare but rather to collaborate and grow. Freedom came from the belief and not from getting rid of the person who she believed made her unhappy.
True freedom or liberation is not about loss or gain of anything external. It has nothing to do with our responsibilities. No lover is going to set you free. No social contract is going to bind your true nature. Even spiritual contracts only serve you to put greater effort in revealing who you are.

If you are choosing to tell yourself stories, ask yourself whether those stories empower you, villainise you or victimise you. It is easy to use healing to beat yourself up. It is easy to use mythologies to lift yourself up. We are a collage of stories. Sometimes we forget that. We make our whole life journey about just a single story. That is like saying you will wear yellow and shades of yellow only for the rest of your life. If you are truly courageous, you would, like I have often started doing to challenge myself, ask yourself, Who would I be without this story?

—
Next post: A fun way to rewrite your victim story.